Arguing that launch monitors are commonplace and essential in indoor golf simulators is like saying that Twitter is a helpful social media tool. Golf lessons have been changed by launch monitor technology. The best part is that it gives you a detailed analysis of your swing. The worst part? The stats aren’t always easy to understand. Therefore, you need a specialist who can sort through the deluge of facts and determine the areas that require improvement and the sequence.

The launch monitor’s information is so detailed that it serves as the basis for understanding performance. Therefore, those modest figures portend significant advancements. Naturally, in that situation, where you might be by yourself in an indoor golf simulator, and those launch monitor data are flashing across the screens like binary code, you need a technique to separate the noise from the important information and make use of the technology.

Even though myriads of data points are available on the screen, only a handful stick out as ones you need to pay attention to. This article will summarize what each of them means and how they can help you improve your game.

Looking at a collection of stats after a golf swing might be scary for the ordinary golfer. While some aspects of golf ball analytics are simple, it’s important to understand how they all fit together to determine what changes you might need to make to your game. You’ll make informed decisions about what to work on during indoor golf practice sessions when you have a wide variety of quantitative data to compare.

Club Path, assessed in relation to the target line, is the direction the club head travels (to the right or left) upon contact. Most golfers associate this number with “in-to-out” or “out-to-in” ball strikes. For a right-handed golfer, a positive number indicates that the club will move to the right of the target upon impact (“in-to-out”), while a negative value indicates that it will move to the left of the target (“out-to-in”). 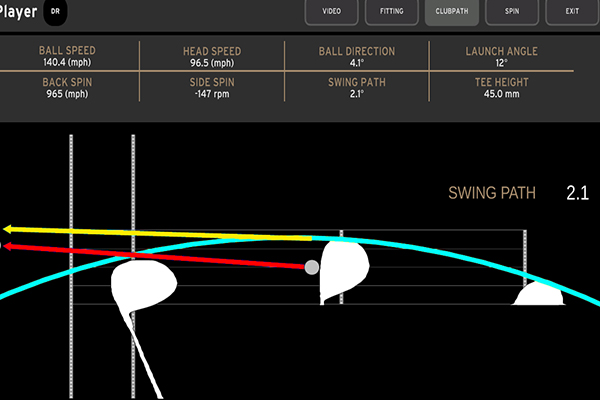 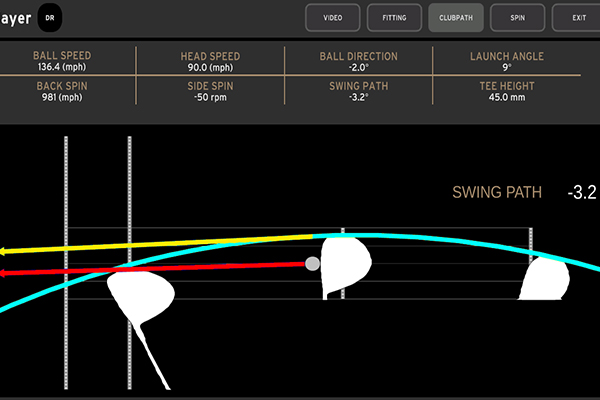 Club head speed is the velocity of the club head right before it makes contact with the ball. This parameter is often expressed in miles per hour (mph). Generally speaking, quicker club speeds result in faster ball speeds, which eventually cause the ball to go farther. The average male golfer swings his driver at 93.4 mph. This is slightly slower than the 94 mph average for female LPGA Tour professionals.

The initial club impact occurs when the club makes contact with the ball. During this period, the club head moves through impact, and the ball briefly sticks to the club face for roughly 0.75 inches. Your swing’s programming determines whether the golf ball will fly high or low, curved or straight, upon contact.

The launch angle refers to the angle at which a golf ball rises above the ground. This statistic is recorded in degrees immediately upon impact. How high and far a ball travels depends on the ball’s spin, speed, and launch angle. On average, most golfers’ goal is to reach double digits (12 degrees on average). For comparison, a typical golfer’s tee ball may carry an additional five yards with a few extra degrees of launch angle.

Ball Speed is the measurement of the ball’s velocity immediately upon impact. Similar to club speed, ball speed is often expressed in miles per hour (mph). In general, long drives will result from faster balls. For comparison, the standard ball speed with the driver on the PGA Tour is around 170 mph. On the LPGA Tour, it is 140 mph. Although ball speed frequently reigns supreme in indoor golf launch monitor measurements, it is not everything.

Calculating the smash factor involves dividing the club head speed by the ball speed. It’s a great way to gauge how well you transmit force from the club to the ball. That ratio for the driver should be around 1.45, or even slightly higher. It should be evident that you have the correct club and shaft combination if your smash factor doesn’t show much variety.

Every shot, including a putt, has a backspin. Most launch monitors display both the quantity of backspin, measured in revolutions per minute (rpm), and the tilt of the spin axis, which some people mistakenly refer to as sidespin. In theory, a ball with sidespin wouldn’t be able to lift off the ground.

With any club, getting more distance usually requires a higher launch and less spin. However, the less spin you have with irons, the more your shots will roll off the green. 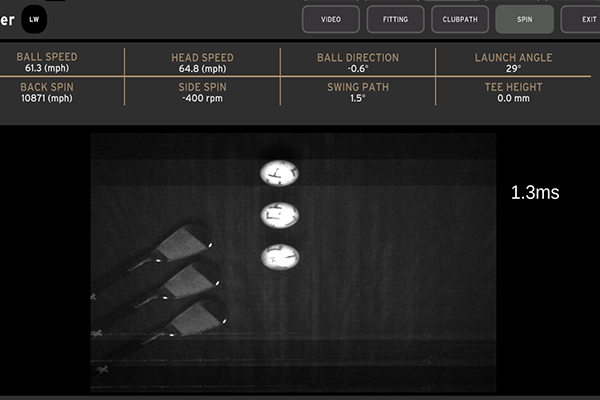 When playing indoor golf, the ball’s distance is calculated by considering any bouncing or rolling after the ball first touches the ground. The simulated ball distance will be significantly influenced by the course condition parameters you enter in your simulator program.

A ball’s carry is the distance it flies before reaching the ground. It is far more accurate and valuable to know than the ball distance. It’s quite helpful to determine your carry distances with your other clubs. Golfers frequently overestimate the distances they can go with each of their clubs, but actual statistics will enable you to choose the best club for the task. 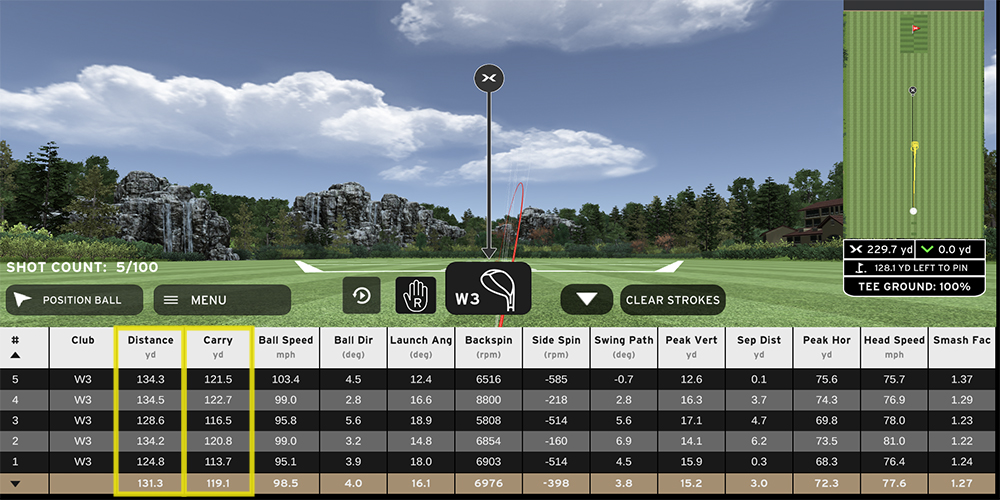 Peak verticals can only be measured using force plates. Peak vertical combines lateral force, vertical torque, and vertical force. All these three are exerted in a golf swing, and each can change the outcome of the golf swing.

A golf shot’s apex refers to the highest point at which the ball ceased to move away from the ground and began to descend. Simultaneously, the ball speed, launch angle, and spin rate will significantly impact the apex of a shot. Depending on your ball speed, you must attain a particular height to provide the best carry and landing angles. For instance, with a 6-iron ball speed of 130mph, you will be targeting an apex of 34 yards.

Indoor golf launch monitor analytics enable players to determine precisely what kind of adjustments are required.  Making the connection between data and feel can help translate indoor golf practice sessions to the outdoor game. Once you are able to correlate the statistics with the sensation or outcome of a good or terrible swing, you can repeat or adjust accordingly. Contact us or visit our blog for more information.